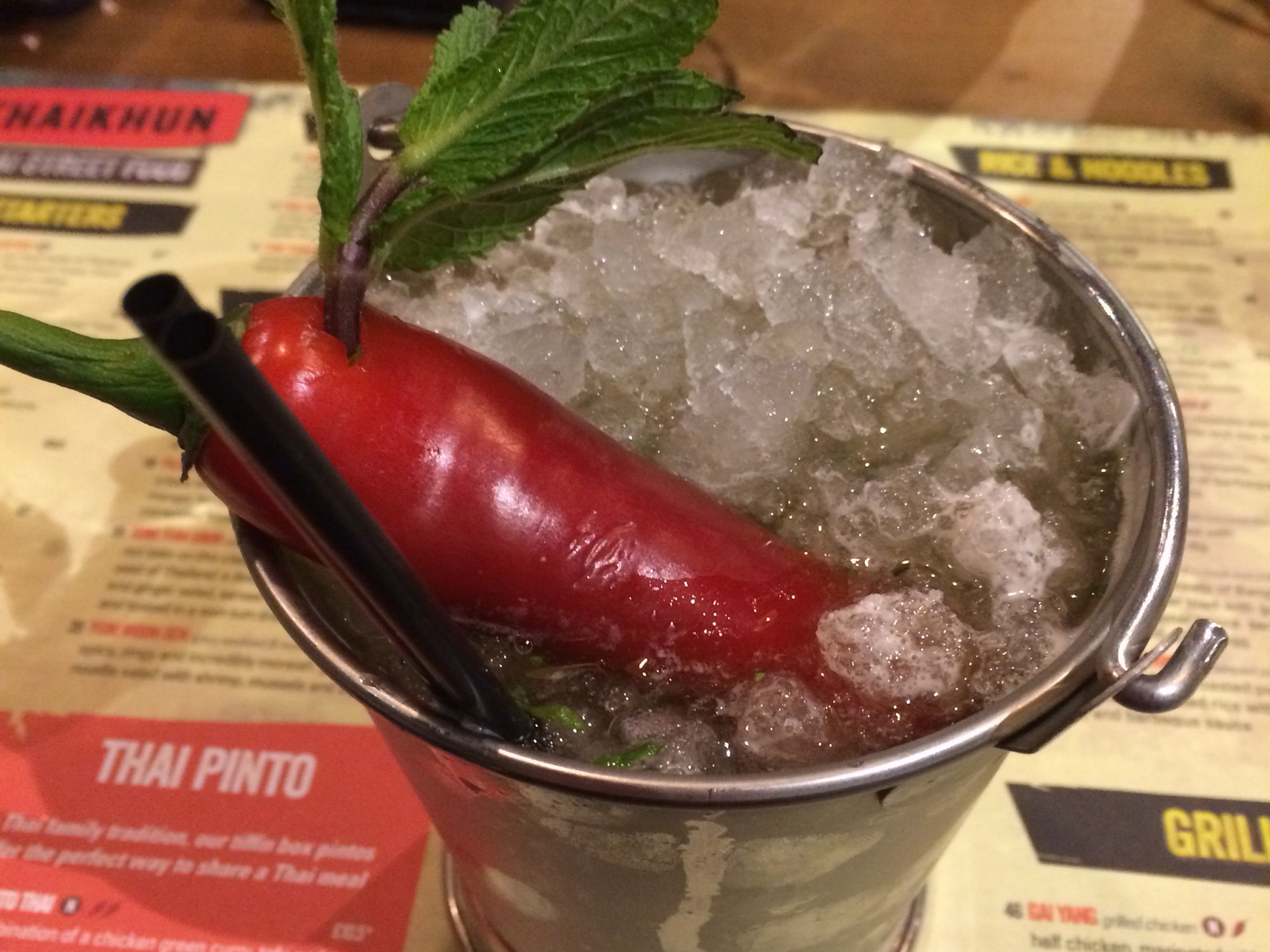 Thank god for girls night out, am I right?

Last week I went out for dinner for my friends birthday to Thaikhun in Oxford. I love this place, I went for my birthday last year and thought it was so good – the cocktails were cute, the food was incredible and the decor is amazing and I’m pleased to say that not much has changed since!

When I arrived I was one of the first there and had come bearing cupcakes for the birthday girl (see https://eatingwithemilysite.wordpress.com/2016/03/03/recipe-carrot-cake-cupcakes/) the waitress who showed me to my table asked whether it was a cake (they had at least 3 other birthdays there that night) I said yes, but not one big cake and I hadn’t bought any candles, she told me not to worry and “we’ll embarrass her!”

Once everyone had arrived we started to choose from the menu and of course order the most important thing, cocktails! – Priorities!

My first cocktail was the Good Time Girl which included flavours such as Vanilla, Butterscotch, Passion Fruit and Pineapple, decorated with hundreds and thousands. It was tasty, although I wouldn’t recommend having many as they were soooo sweet. But a good start.

Before we ordered our starters we saw a leaflet saying ‘Dare to try?’ Silk worms or Buffalo worms – anything new and exotic has my name on it, so of course I was willing to try this. We ordered the Buffalo worms and I was surprised by what arrived, I’ve never seen a Buffalo worm before and expected them to be big however what we got was a shot glass of little tiny worms.

They were dried and crunchy and didn’t taste of much, after much debate we settled on the agreement that they tasted very similar to pistachios. Not amazing, but glad I had the opportunity to try them.

Again, apologies to readers, I’m still not used to taking pictures of everything I eat as I missed out on taking a picture of the starter, which was well presented.

I couldn’t decide if I wanted a starter or not, when one of my friends suggested we share the Bangkok Street Platter, which included Prawn Toasts, Chicken Satay, Curried Corn Cakes and Esarn Sausage. YUM.

Prawn Toasts and Chicken Satay were very tasty, but nothing different from the normal ones you get in some restaurants. The Esarn sausage was different, was very nice and almost tasted like chorizo. The Curried Corn Cakes…oh em gee, so good! I love a Corn Fritter and for anyone whose had those, you’ll love this, with a little hint of curry spice, definitely would get that again, just for those!

I really couldn’t decide what to have for the main, it all looked so good. I wasn’t in the mood for spicy and I love Pad Thai dishes. So I went for Pad Thai Jay in the end which is the veggie version with tofu as I’m trying to cut back on my meat intake.

It was pretty tasty and had a bit of a kick which I wasn’t expecting, but this was dulled and improved by squeezing on the lemon that had been supplied. A pretty good dish, my only qualm would be that I thought in a traditional Pad Thai there are peanuts, but there were none in this version. But I guess that is the point, this was their take on Pad Thai.

It wasn’t long before we’d finished our cocktails, so we ordered another one, this time I ordered the cocktail named after the restaurant: Thaikhun. It was the more authentic of Thai cocktails on the menu and it was packed with ginger, lemongrass, mint, apple with a few dashes of  scotch and triple sec and not to mention the chilli that’s prominent in the picture and served in a cute little metal bucket style cup.

I’m telling you now, it was soooo good! Unexpected flavours that mingle so well together and the chilli just gave it a little kick that made it oh so exciting and taste bud tingling. – Will order this every time I go back! 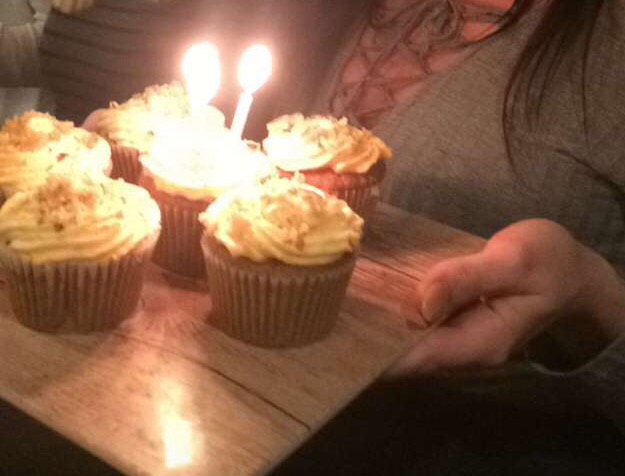 Once they had cleared away all the main dishes, it was time for them to bring out the cakes. As you can see in the picture above they arranged them on a little board and had put 3 candles in the middle one, cute.

I wish I had recorded them when they came out as they had drums and symbols and did a little chant of happy birthday for my friend. This was really nice as they seemed really enthusiastic and not like some other restaurants where they are obviously not into singing happy birthday.

Overall a lovely experience with good food, great cocktails and amazing fun. Definitely a go to for a great night out with the girls or anyone really!